Kea is a one of a kind destination for the aficionados of diving tourism as in its seabed lay four extremely interesting shipwrecks, that marked its recent history: Titanic’ s twin sister, floating hospital Britannic and French ocean liner Burdigala, paddlewheel steamboat Patris and a German Junkers 52 airplane from WWII. 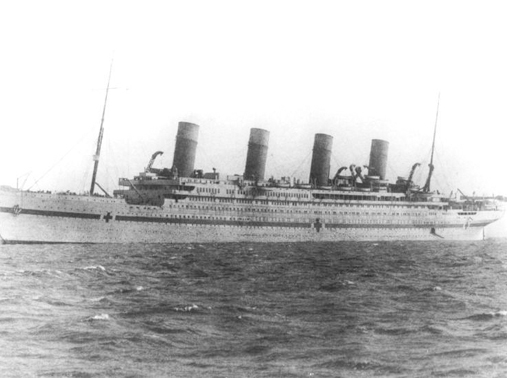 In 1975, off the port of Kea and at a depth of 120 m., Jacques Cousteau discovered the shipwreck of the Britannic, which sunk accidentally having hit a German mine in November 1916, and whilst sailing on route to the hospital station of Lemnos, carrying British wounded crew.
The Britannic, launched in 1914 and with a length of 269 m., was one of the largest ocean liners running the North Atlantic route and sister ship of the Titanic. With the declaration of the WWI, however, she was requisitioned by the British Admiralty and converted immediately into a floating hospital. Despite the fact that its design had improved considerably after the sinking of the Titanic, the ship sank in only 55 minutes. However, thanks to the appropriate rescue equipment onboard, but also to its proximity to Kea, roughly 1.300 passengers were rescued, mainly due to the quick launch of the lifeboats and the continued operation of the engines, while only 30 lost their lives. (Photo: Michail Michailakis collection)

On a night in February  1868, eight years after its construction, the luxury steamship “Otho”, later renamed to “Patris”, following the overthrow of King Otho, on whose order the steamship was built on the River Thames in England, hit the reef  off Koundouros (Makriopounta) on a journey from Piraeus to Syros. The roughly 500 people who were on board survived. The wreck, which remained unknown even to the  inhabitants of the island, was discovered after 138 years and after more than 30 plus  dives in a period of three years. The hull, 217 feet in length and weighing 641 tones, was found cut in two pieces, at a depth between 28 and 54 m. According to the head of the exploration team, Mr. Vasilis Mentogiannis it is the first time that such a ship is  discovered in the Mediterranean, which the newspapers of the time described as “one  of the nicest, if not the greatest, steamship of the Greek Steamship Company”. The 30 objects that have been recovered can be seen on display at the Syros Industrial Museum. (Photo: Derk Remmers) 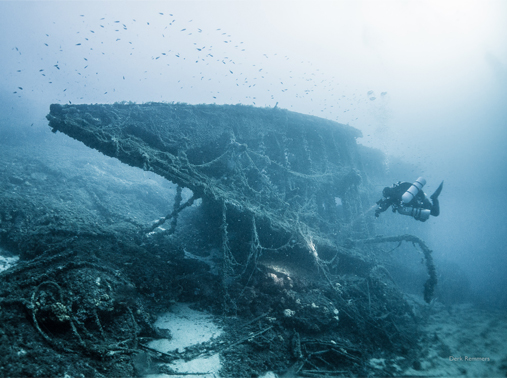 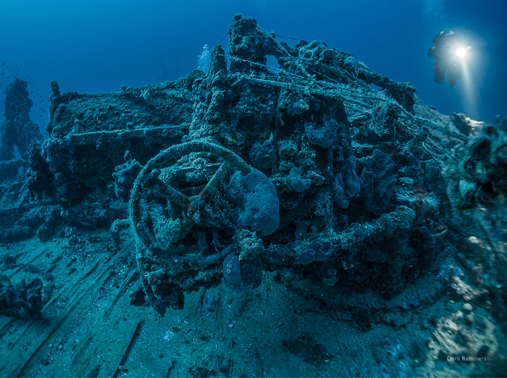 In September 2008, the diving team of Kea Dive Expedition, revealed the existence of an unknown shipwreck that had been discovered by coincidence with the use of a side scan sonar one year previously by Dr. Georgios Papatheodorou (hon. professor of the dpt. of Geology of the University of Patras) at a depth of 70 m. and about 2 miles from the point of sinking of the Britannic. This is the French commandeered ocean liner S/S Burdigala, the former S/S Kaiser Friedrich, built in 1897 and 180m in length, which sank on 14 November 1916, by a mine laid by the same German submarine U73, that just one week  before had caused the sinking of the Britannic. (Photo: Derk Remmers)

During the mission for the discovery of S/S Burdigala, the side scan sonar detected at a short distance from the wreck and at a depth of 65 m. an unknown aircraft, which the same diving time did not manage to identify until the spring of 2009. The find was the remains of a three engine transport Junkers 52 airplane (with a wing span of approximately 26 m. and a fuselage length of about 20 m.) of the type involved in the operations of the German army in the Aegean and specifically employed during the battle of Crete (1941) and the battle of Leros (1943). It is the best preserved of the four similar aircrafts that have been located within Greek territorial waters, and the only one that sits in a horizontal position, with all of its equipment intact and undisturbed. Its position indicates that the engines were not in operation during its crash, so most probably it was forced to land on water in September 1943. One of its occupants perished and two were wounded, while the rest of the crew were transferred unharmed to Athens. (Photo: Areti Kominou) 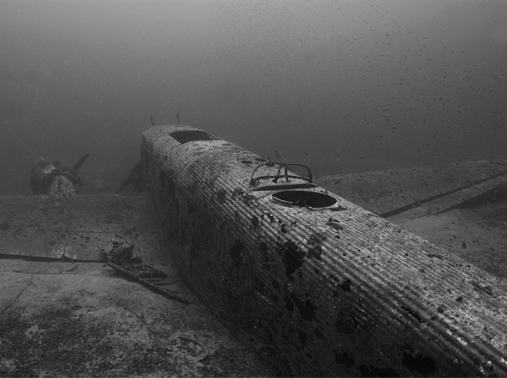