An island with such great history as Kea could not but be full of disperse monuments in land and sea. Either you take a short walk in Chora or you make an explorative trekking through the footpaths, you continuously stumble on interesting landmarks, dated from the prehistoric period to the previous century.

On the footpath that starts from Aghios Spyridon area and ends up to Otzias bay, you will meet the renowned Lion, the trademark of the island. It’s an archaic sculpture of the 6th-7th c. B.C. carved on a solid schist rock of approximately 8 m. The lion is connected with many legends related to the drought that had affected the island in the ancient times. According to the most dominant legend, the time when Kea was still called “Hydroussa” because of its abundant waters, a ferocious lion appeared in the forests of the island that until then were populated by Nymphs, the water fairies, and he chased them. Then the urge of the gods caused the drought of the climate in Cyclades and especially in Kea, which was restituted with the arrival of demigod Aristeos from Thessaly, son of god Apollo and nymph Cyrene. Aristeos managed to appease the gods, the drought was significantly confined and the beneficial northern winds of the summer, cool “meltemia”, began. 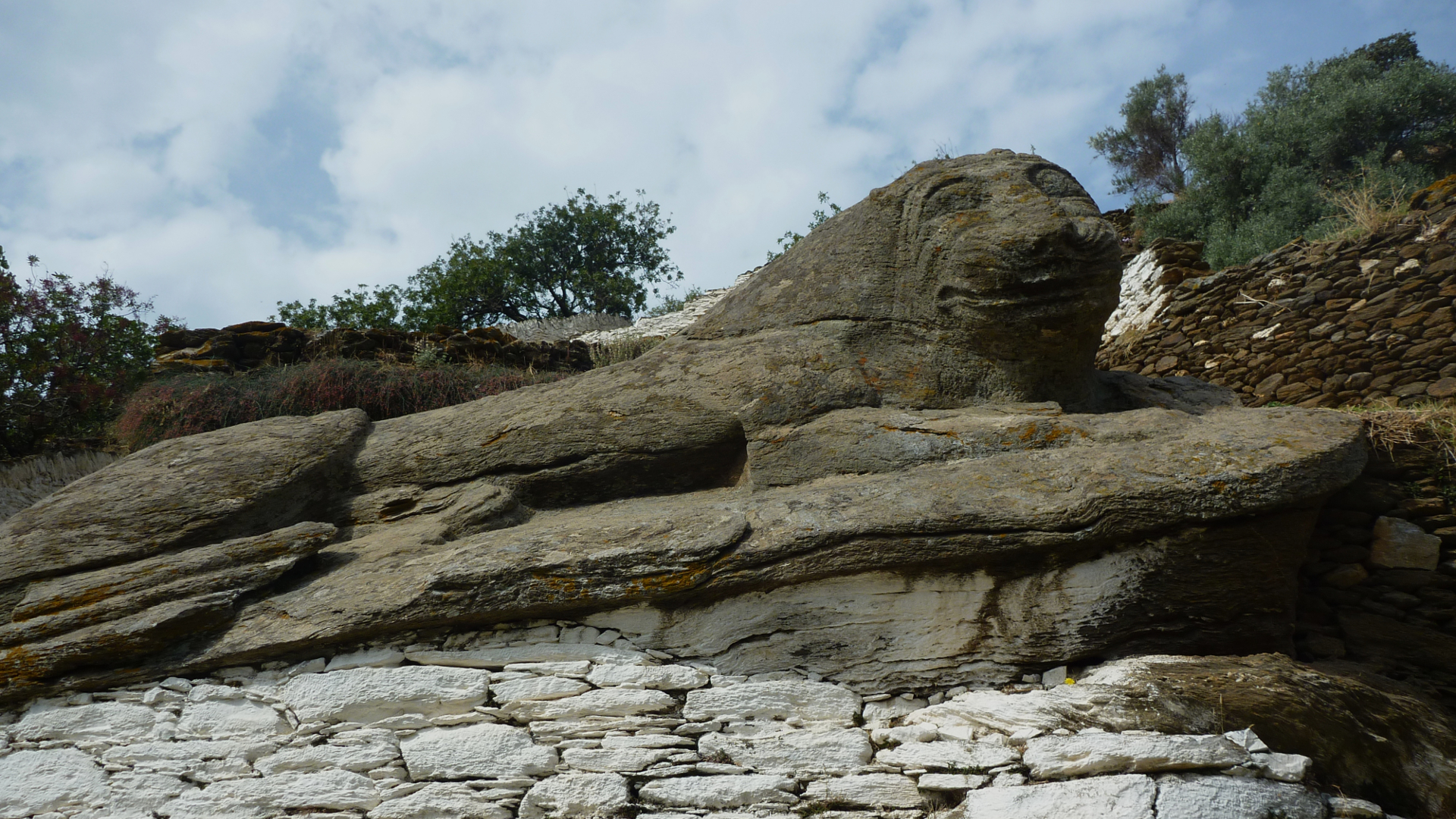 Karthaia is the most important archeological site of the island. As it occurs by the finds, it should have been the most prominent from the four cities-states. The earliest finds in the area date back to the early Cycladic period but are sporadic and do not support such an early installation at the site. The first nucleus habitation of Karthaia reached the Geometric period. Gradually the city grew, reaching its height in the 6th and 5th century B.C. and it seems that it survived as a settlement until the Paleochristian years.

The site includes an acropolis fortified with walls of more than 2 klm. length with gates, towers and boulders. The main area in the city is the Doric Temple of  Pythian Apollo (c. 530 B.C.). In the vestibule and the ” square ” in front of the temple,  many bases and offerings pedestals are saved, like a series of voting pedestals of the parliament and the municipality of the Karthaians. Another Doric temple (c. 500 B.C.) found in the area is allegedly attributed to Athena because of a statue of the goddess, which probably comes from the pediment of the temple.

It is the oldest known Doric temple in Cyclades. Its pediments and promontories were decorated with sculptural compositions depicting the Amazons Battle, which ones you may see in the Archeological Museum in Ioulis. In the same area there is also the building of unknown function “building D” (c. 300 B.C.), which owes its conventional name to letter D that Danish archeologist Brondsted noted on his first sketch of the area in 1811. Finally, at the western side of the acropolis lies the stone theater of the ancient town, that dates back to the Hellenistic times. In 2015 its excavations were completed, revealing a small sized, simply constructed and totally built up theater with 880 seats capacity. It was constructed in the Hellenistic period while in the Post-Roman period there was added a baths complex.

In the dual bay of Karthaia distinguished today is the submerged ancient breakwater while at the top of the hills of Aspri Vigla, where today stands the church of Mirtidiotissa, there was an ancient temple. On the slopes of the hills spread out houses, as evidenced by sections of walls, staircases, stone piles and utilitarian objects.
South of the theater, to the east of the temple of Apollo and on the road connecting the two terraces survives a tank system for the water supply of the city (Hellenistic and Post-Roman times). Inside the temple of Apollo and around of the temple of ” Athena ” there are graves (6-7th century A.D.), often lined with ancient architectural elements in secondary use. The most important finds of the excavations in Karthaia are exhibited now in the Archeological Museum in Ioulis.

The visitors of Ioulis have the opportunity to admire two significant architectural monuments, both works of the great German architect Ernst Ziller, the new  Town Hall  and the historic Town Hall of the island.

The building where is based the Municipality of Kea used to host Ioulis’ Elementary School. It is built based on Ziller’ s designs and has in its 100-year life hosted, among others, a Pre-Secondary School, a Secondary School and a High School. Today it is regarded as a building under preservation while recently it has been restored.

The historic Town Hall is a remarkable neoclassical building of 1902, decorated by finds from the archeological sites of the island. In its façade stand out the clay statues of Hermes and Apollo, while on the western side an ancient female sculpture and a relief of the classical era have been built into the wall. Inside the building more reliefs have been built into the walls while the conference room of the Municipal Council contains impressive ceiling paintings. 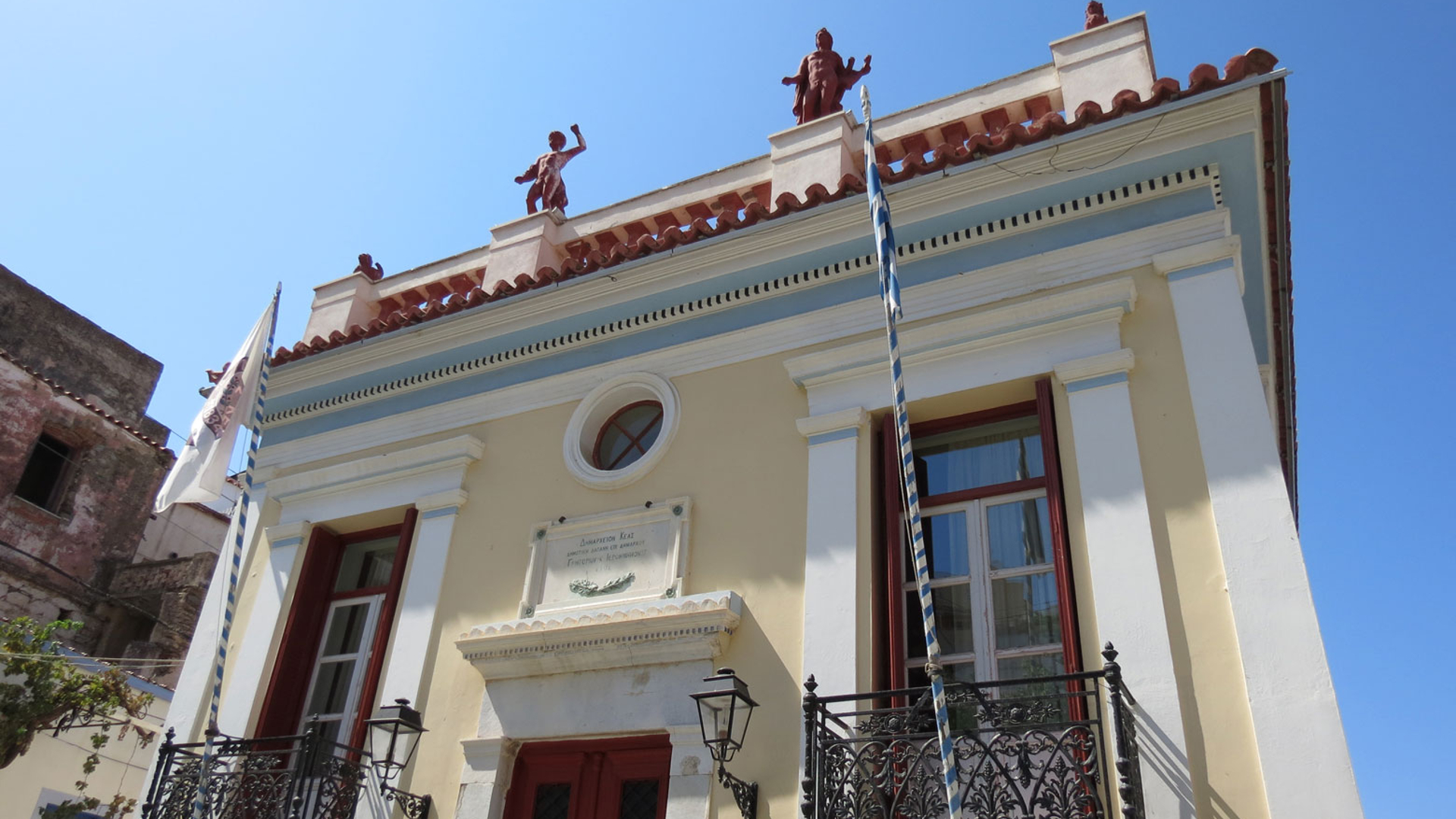 In Korissia, your attention will be drawn to a chimney of 45 m. height; it is the chimney of the Enamel Factory, the only Greek factory that produced enamel utensils and the biggest one in the Mediterranean area, which functioned between 1927 and 1957, playing an important role to the economic and social life of the island. The founder o the factory was tobacco trader ioannis Gleoudis and most of the workers were refugees from Asia Minor. Before the war it used to produce household utensils and signs for public or private use. In 1936, under the direction of Athanasios Konstas, the factory got its first state order for military canteens and then expanded to the war industry by manufacturing mortars. These are the most glorious days when the factory reaches the point to export its production to the Balkans and the Middle East and occupies 300 workers.

Due to this successful procession of the enamel factory, Kea, sees a great economic boom until 1957 when the factory closed permanently, after the death of its inspired financial manager, Athanasios Konstas, and after numerous financial problems.

In 1991 its biggest part was regarded under protection for its contribution to the study of industrial culture in Greece. In 2002, a group of craftsmen who used to work in the factory and were in possession of a huge amount of machinery, molds, utensils, models and other objects laid the foundations for the creation of the “Association of Friends of the Enamel Factory of Kea “. After mobilization of the members, they gathered from other factories in Attica the machines from the factory that had been sold and are now exhibited in a municipal area in Korissia. The main objective of the association is the return of the machines in the factory and the creation of an Industrial Museum.

The lighthouse of Aghios Nikolaos is located at the edge of the port in the big natural gulf of Kea ‘s canal and is built over the ruins of Poseidon Temple. It was built in 1831 by the French Lighthouse Company, it has 8 m. height and was the first lighthouse ever functioned in Cyclades and the second one in modern Greece. Next to it you will find the little church of Aghios Nikolaos. Since 2010 it is characterized as a monument and appertains to the category of the antiquities under protection.

The lighthouse in cape of Tamelos was built in 1893 to light the strait between Kea and Kythnos. Its tower has a height of 7,5 m. 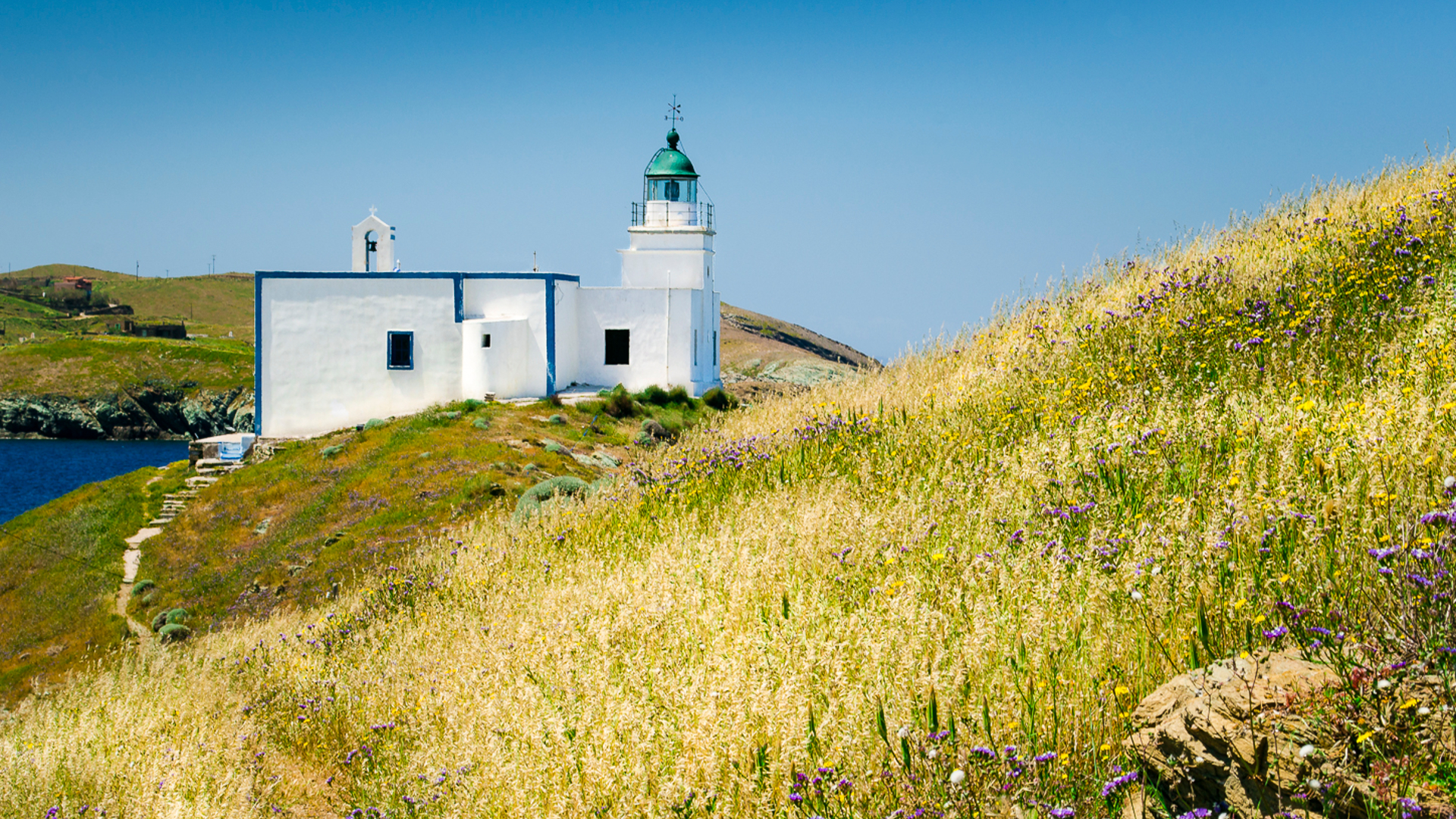 The tower of Aghia  Marina is an impressive 5-level tower from local schist stone and marble (4th century B.C.), a typical sample of an independent fortification tower from the Hellenistic period and one of the tallest ancient buildings that have survived until today. It was built in Kea’ s inland, between the ancient cities of Korissia and Poiiessa and it functioned as a fortification construction for the protection of the broader rural area. Around 1600, when Aghia Marina Monastery was founded, the tower was included in its precinct again for defense reasons. On September 8th 1858 a big segment of it collapsed after an earthquake and part of its building material was used for the restoration of neighboring buildings.

Today only the northern part of the tower is preserved in a good condition, but as soon as the maintenance and restoration interventions are completed, it will be again open to the public. 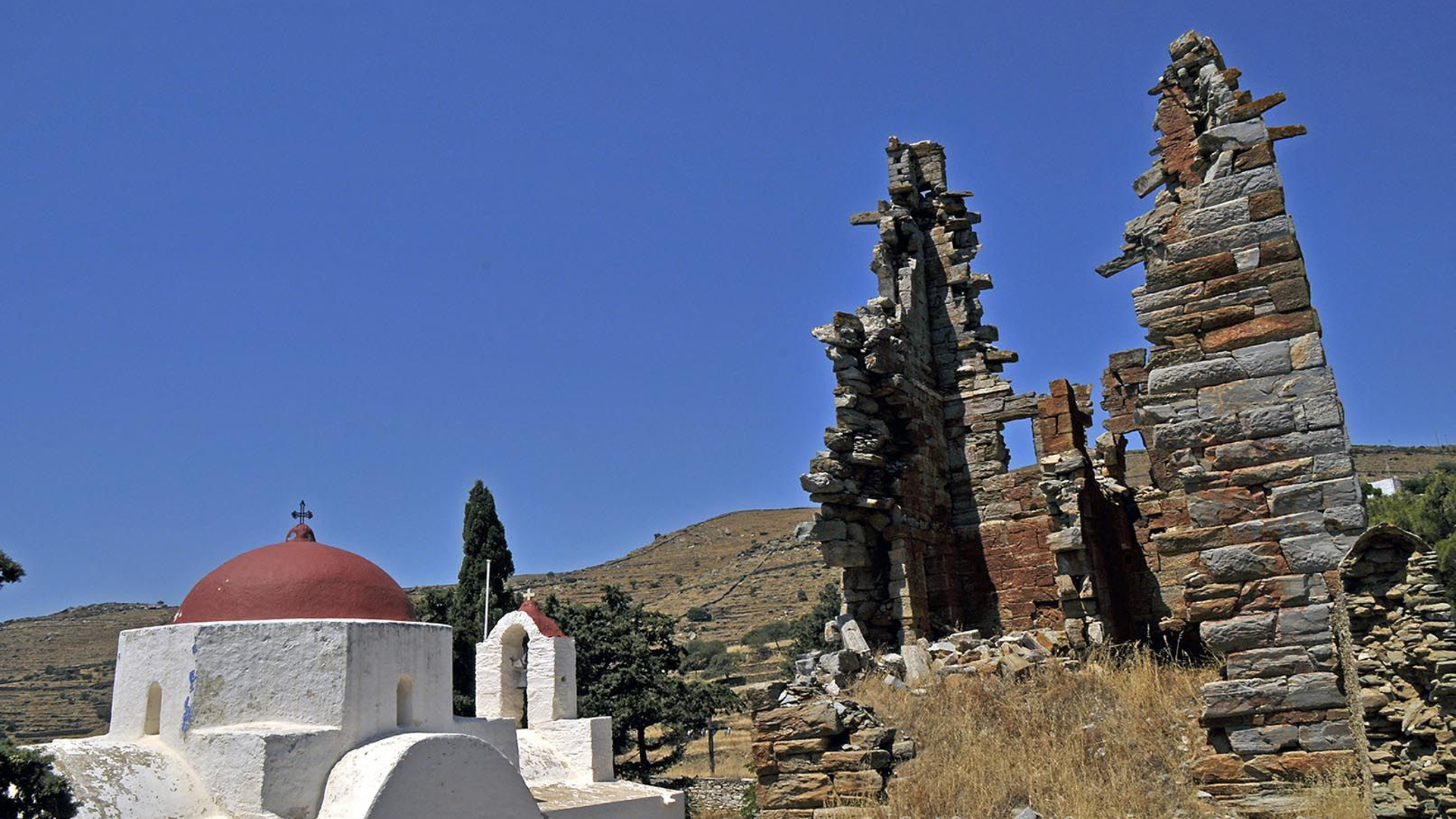 Just on the opposite site of Vourkari lies the peninsula of Aghia Irini, that was named after the homonymous picturesque church. Here, the excavations conducted in 1960 revealed one of the most important prehistoric settlements, which had been reconstructed multiple times after natural disasters; the result was that the architectural ruins of previous periods became the foundations for the next generations, creating a tight urban tissue, in which it’s difficult to identify the chronological relevance.

Here were found the only Temple of Dionysus of this period (2000 B.C.), a part of the fortification along with a tower and a gate (2000-1500 B.C.), the ruins of a sewer and a water supply network (15th century B.C.), “master’s mansion”, the ruins of a luxurious house built according to the Mycenaean standards (16th-15th century B.C.). The most impressive and internationally unique find are “Kores”, 50 clay figurines from the Late Bronze Age, that were discovered in the area of the temple and are assumed to be worshippers, priestesses or even goddesses. Today they are exhibited on a prominent position in the Archeological Museum of Ioulis, together with more finds of the area.

Makronissos or alternatively known as “Nisos Eleni” (Helen’ s island) belongs to the Municipality of Kea and is located between Kea and Lavrio. According to the legend, it was in a cave in the northern part of the island, that Paris hid Helen of Troy after kidnapping her. That’s why the island was named after her.

However, Makronissos is known for the historic memory of the incidents in post-civil war Greece, as it was a place for political exile. Today it is inhabited only by a few shepherds. Its port is not accessible by the ferry but you may visit it by private boat.