Kea, as every island, is dispersed with religious venues of pilgrimage, special monuments of architecture and art, some of which are located in the hearts of the villages, while other ones on the slopes of the hills with a view towards the sea.

These monasteries, churches and chapels apart from their position in the local community, become meeting points for the locals and the visitors every year on the occasions of the big celebrations of Orthodox Christianity, in Christmas, in Easter, on August 15th and in the feasts in the memory of the saints. 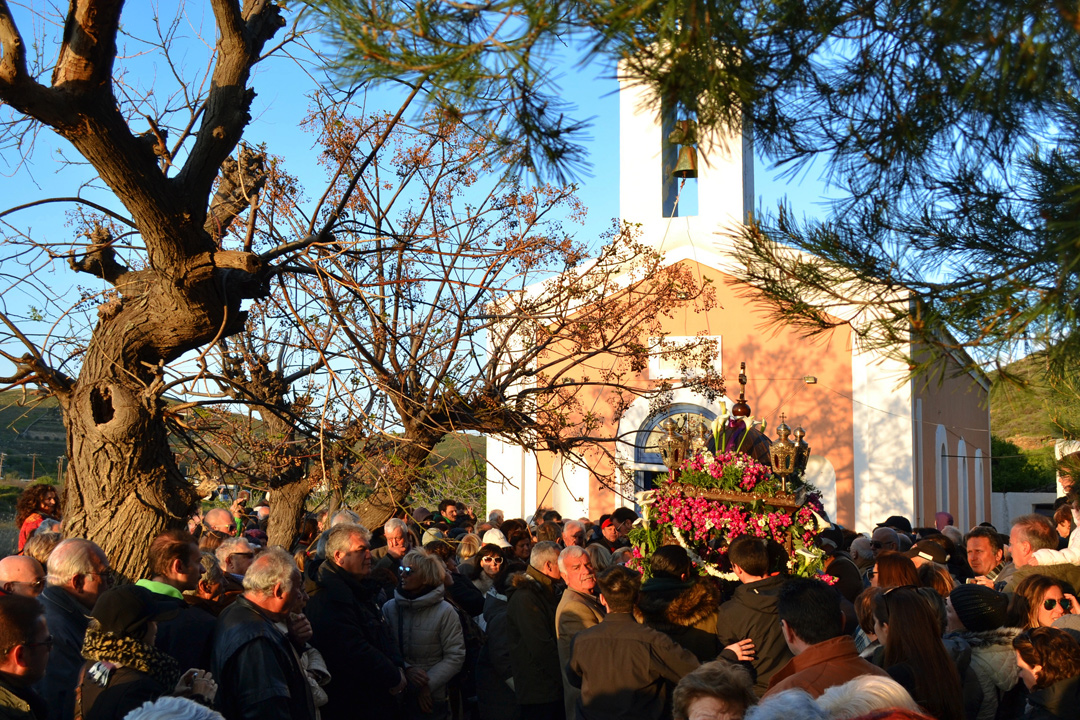 In springtime Kea gets full of colors. So, there couldn’t be a better scenery than this landscape to celebrate Easter, the most important celebration of Orthodox Christianity. Every church, from the little monasteries to the little chapels of the island, honors the Holy Week with grandiosity and devoutness, culminating with the litany of Epitaphios on Good Friday and with Christ’ s Resurrection on Saturday night.
Don’t miss the chance to find yourself in the heart of Cycladic traditions and taste the original Easter atmosphere just a breath away from Athens.

According to the Orthodox tradition, a winter night in 1699 a strong ray of white light on the abrupt hill Kastri lead the inhabitants and the shepherds of the area to a little cave. There, they saw a Christian icon depicting the Dormition of Virgin Mary covered with some ground. The believers interpreted this sacred and precious find as a divine indication about where a church of Virgin Mary should be built and decided to start constructing it there despite the roughness of the location. In spite of all difficulties, the monastery was completed in 1700 and since then it safeguards the discoverd icon. Each August 15th, when the celebration of Virgin Mary’s assumption takes place, there is a pilgrimage by the inhabitants and visitors of the island and a big feast, while many people visit also the monastery all year round. 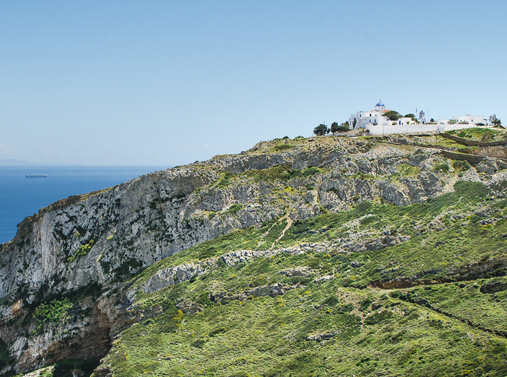 Just a short distance after Chora, in the junction of the road that leads to the Monastery of Panagia Kastriani, lays the byzantine Monastery of Aghia Anna, looking towards Chora and the Aegean. If you observe it carefully, you will notice many elements that prove that it has been constructed by ancient building material. It was one of the most prominent and best-organized monasteries in Kea in the 17th century. Today, apart from the church of Aghia Anna, there are only a few ruins left from several parts that composed the historic monastery. It celebrates each December 9th and July 25th.

The church of Evangelismos, the cathedral of Ioulis, towers over the entrance of the town in Katochori. It was built in 1867 and is a three-aisle basilica. The most important celebration takes place there on March 25th. 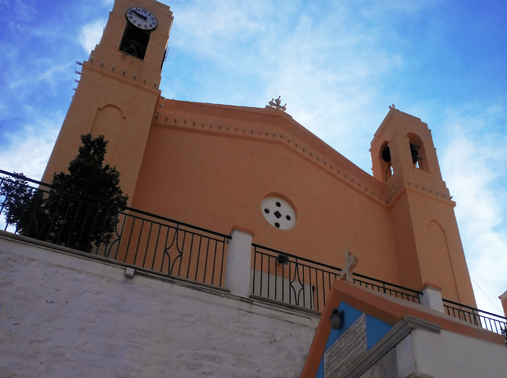 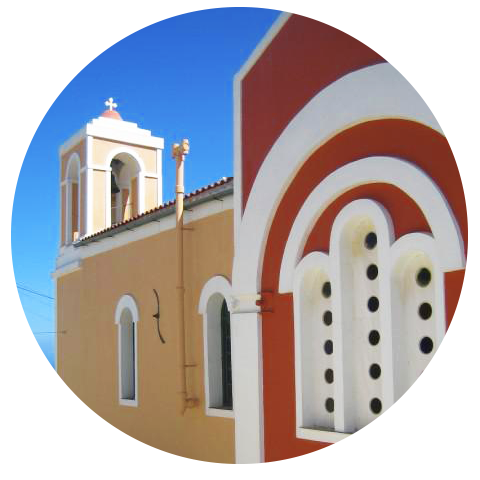 The church of Metamorphosi tou Sotiros, alternatively known as Aghios Spyridon, is a building of byzantine rhythm and one of the three churches that belong to the parish of Ioulis. 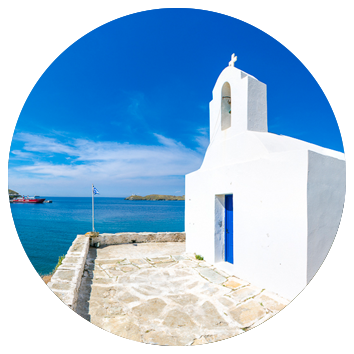 You will see the little church of Aghios Georgios at the end of the beach on the rock, as soon as you reach the port. Especially in the evening it is a beautiful and unique view, when is lit up. 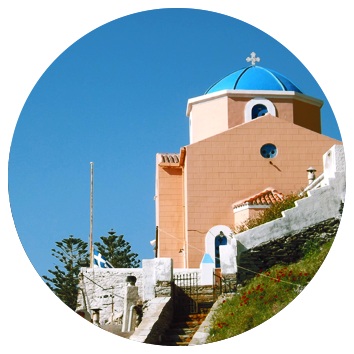 The first view you have when you reach the port of Kea is the cross-shaped church of Aghia Trias that belongs to the parish of Korissia.

On the way to Pera Meria, you will see over the hill the byzantine Monastery of Episkopi, one of the oldest monasteries in Kea. There are still remains of the fortified wall that protected the monastery. Probably Episkopi and the broader area of Messaria were the byzantine centers of the island.
Inside the temple there has been discovered a very significant inscription from 4th century A.C. with a list featuring the names of the inhabitants of Ioulis and Korissia. In many spots of the church you can detect ancient building material, such the Doric capital that is embedded in the altar. According to these hints, there should have preexisted in the area of the hill an ancient temple dedicated to goddess Artemis. It celebrates each year on August 15th.

Just a short distance before Kato Meria, you will find Aghios Timotheos. It is built in the last years and is of byzantine rhythm. Next to the church, there is a cavern, where Saint Timothy used to during the summer, from where water spouts only the summer months. His memory is honored on August 16th and July 13th.

The church of Aghios Symeon, after which the homonym village was named, towers over the top of the hill. It is built on the foundations of a temple dedicated to goddess Venus and celebrates each September 1st and February 3rd.

The church of Aghios Charalambos, who is the patron saint of the island, is located in Kastro district in Ioulis. Its memory is celebrated on February 10th and is a very important day for the inhabitants of the island.

This monastery is located 12 km southwest from Chora, on the top of the homonym mountain and is estimated to have been built in 16th century and restored in 17th century. Today only the monastery’s church has survived, which is dedicated to John the Baptist.

The byzantine church of Aghios Nikolaos is in Ellinika area, built on the ruins of a tower from the Hellenistic years, one of the 73 towers that existed in the island. Inside this little church there are still noticeable wall paintings.

The church of Aghioi Apostoloi is built on the ancient junction in the route Ioulida-Karthaia-Poiiessa. It was built in 12th century and is a classical byzantine cross-shaped church. Inside there are still preserved remarkable wall paintings estimated to date back to 13th century.

The church of Panagia ton Polo is located in the archeological site of Karthaia. It is a picturesque little church dedicate to Virgin Mary, built on the edge of the rock on the ruins of ancient temples.

The church of Aghios Dimitrios is located at a prominent position in Panochori in Ioulis. It was built in 1833 in a cross-shaped rhythm with a dome. Inside the church, there is a remarkable marble altarpiece, constructed by an artist from Tinos.

The picturesque little church of Aghios Emilianos is located in the area of Koundouros and celebrates each year on July 18th.

The little chapel of Aghios Sostis is located at the end of Otzias beach.